The Servant, the Ferryman and the Relic

The title sounds like a philosophical fable, a dreamlike tale, a belief shared by believers from all walks of life. But he speaks, above all, despite his backward references, of an increasingly hot topicality on the subject of wealth and poverty. Some time ago, the magazine « L’Histoire » had the headline « The Rich and the Poor, 1000 years of inequality ». Far from me the idea of any morality or a trial of intent. I must admit that I had a lot of trouble choosing the direction of this collection. To be honest, I didn’t want to choose and each character finally found its place.` The Servant, the Ferryman and the Relic. The Servant embodies a girl of the woods, glades and ponds. A peasant woman who evolves in a bucolic universe which translates my desire for stripping back. A pauperism inspired by a series of photographs by artist Jackie Nickerson who photographed farm workers in Zimbabwe in 1996, and who emphasized the unique and beautiful clothes that the workers themselves made up. A foolproof identity, individuality and modernity. The silhouettes appropriate the traditional influences of Europe but having washed them of any coloristic folklore. Francisco de Zubarán, a great Spanish Baroque painter and his compatriot, José Ortiz Echagüe, photographer, follower of pictorialism, also accompanied me in this quest for authenticity. White, ecru, ivory, beige and greige make up the range of models. A skirted «Romanian» dress is the basis of the history of the Handmaid’s outfits. We then come to ennoble by layering capes, raincoats, vests, short jackets, shawls ... 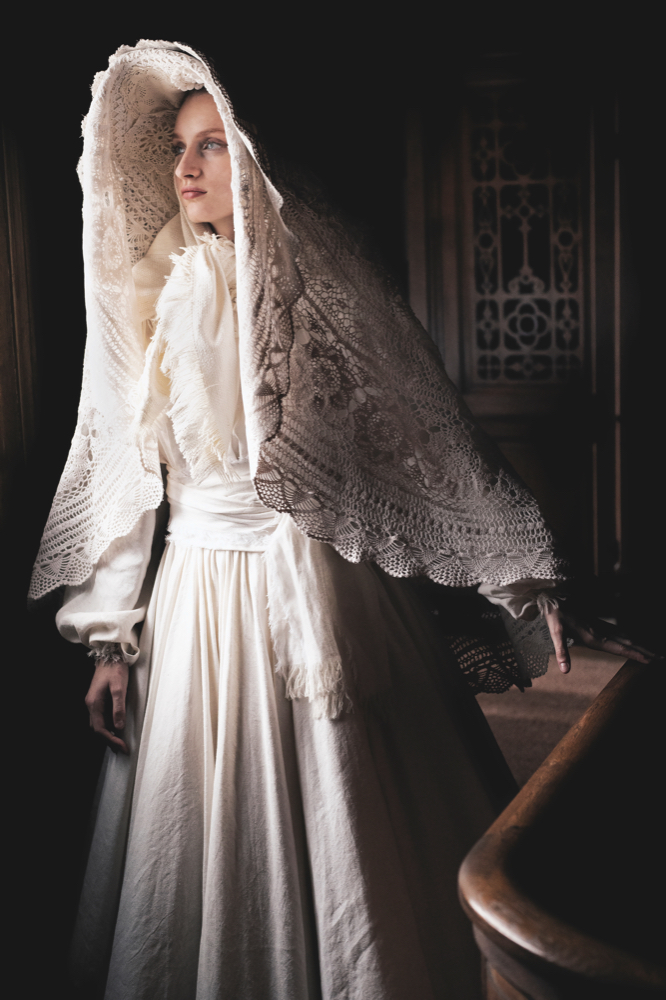 The materials are raw or rustic in appearance, a blend of linen and silk, silk and cotton, silk and viscose, plasticized organza, frayed jacquard, wick and thread wool, boiled wool, crochet and pleated velvet Mariano Fortuny y Madrazo style. The ferryman makes known and propagates a work, a doctrine, a knowledge. He is the intermediary between two cultures and two eras. The ferryman, so named, is also a two-sided mirror. You will discover him blond in a neoclassical white toga but also brown, in a fiery black jumper, draped in a cape floating like a standard. Jean-Jacques Rousseau, who has never left my thoughts, is once again present in Ermenonville, not far from Chaalis. He will live there for the last ten years of his life.

Here, he is at the heart of his deep convictions, those related to nature. Among other things, he built the Temple of Modern Philosophy there, overlooking Lake Ermenonville. The places have evocative names, the “writers’ trail”, the “witch stone”, the “sea of sand”, the “dreamer’s walk”. Later, Etienne Pivert de Senancour and Gérard de Nerval made this land, already steeped in spirituality, one of the cradles of French literary romanticism. The Domaine de Chaalis, in the heart of the Ermenonville forest, was the film’s natural setting.

Nélie Jacquemart-André, last owner of the Royal Abbey of Chaalis and famous art collector, said « it is one of the most admirable landscapes in France

». This former Cistercian abbey, founded by King Louis VI at the beginning of the 12th century, has undergone many changes since its foundation, but the remains of its abbey church bear witness to its past grandeur. The Abbey of Saint Guillaume was, in the Middle Ages, a powerful economic and intellectual center, close to Paris. Many personalities and kings of France regularly attended the abbey to interact with the monks, like King Saint Louis.

After experiencing a period of decline at the end of the Middle Ages, the estate rose from its ashes during the Renaissance. The frescoes of the Italian painter Primatice bear witness to this. Despite the ravages of time, the Domaine de Chaalis has remained a green setting containing many treasures. A place of inspiration which today is the property of the Institut de France.

I had, for a long time, in archives, sublime images of Bavarian relics from the magazine F.M.R.

A few months ago, in a bookstore, I saw, to my great happiness, a book called « Catacombs’ Treasures ». I find many photographs of these relics.

But what is it exactly? 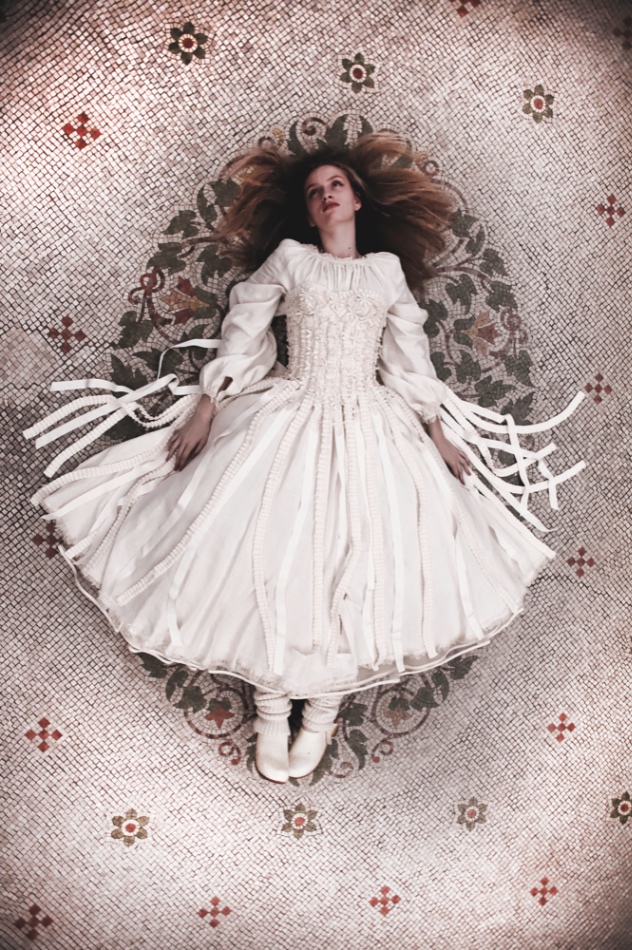 The author of the book relates that in the 1723s a complete skeleton labeled as that of Saint Albert arrived in a small church in Bavaria. This skeleton was beautifully adorned by a nun named Pontentia Hämmerl.

Gold threads, precious stones, fine pearls have been embroidered or encrusted on the bones. The relics were also clothed in precious fabrics and displayed in display cases. I saw there a dream of eternity and as I longed, too, for opulence, we created our own relic and dressed it with coats in jacquards of floral spirit and vat paper, in mineral brocade, in Greek Orthodox damask, in baroque tones. Pieces embroidered in-between with gold and copper mechanical lace, water pearls, ruched edges and pale gold guipures. These relics were the object of devotion and wonder. They also had for mission to be the bridges between the wishes the wishes of the priors and the heavens. So, fable, tale, belief or simply allegory. This season is about, above all, a simple intention, that of questioning.

The world of Franck Sorbier ...

« Qualifying » would already be putting it in a cage ...

Thanks to Frank and Isabelle 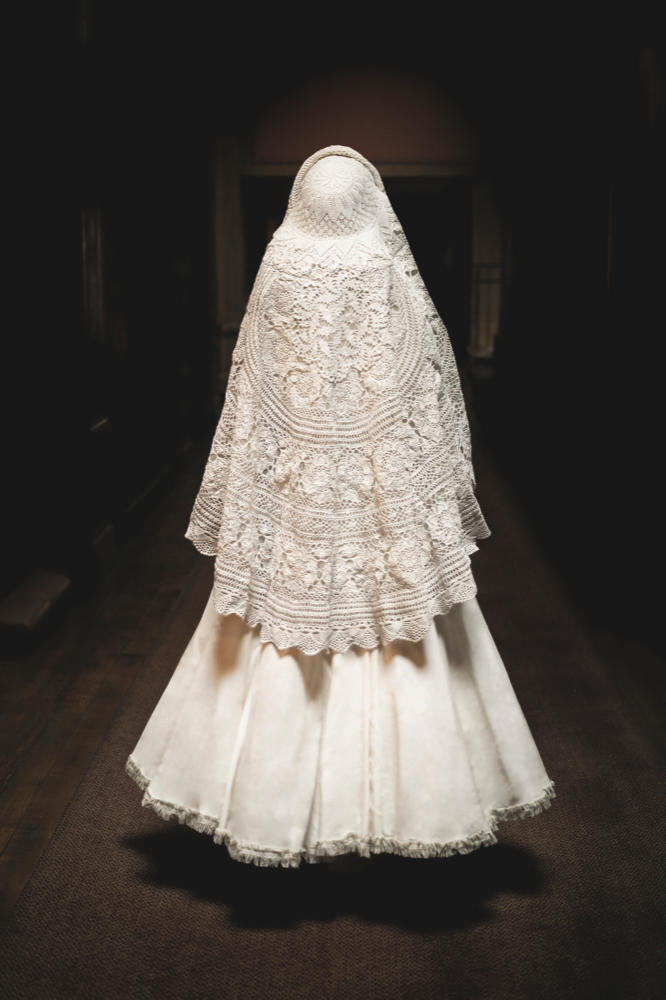 2. «Romanian» dress with a belt in silk and ecru cotton on a ruffled tulle petticoat.

3. Bustier in lace from Société Choletaise de Fabrication, grosgrain ribbons and ecru guipure flowers on a « Romanian » dress in silk and ecru cotton on a ruffled tulle petticoat.

4. A large cotton crochet «blanket» capeline over a «Romanian» dress with a belt in silk and ecru cotton on a ruffled tulle petticoat.

5. A shepherd’s cape in boiled wool with two-tone greige and ecru patterns

6. A hooded houppelande in plasticized organza veil edged with a ruche on a « Romanian » dress belted with an ecru silk and cotton taillonne on a ruffled tulle petticoat. 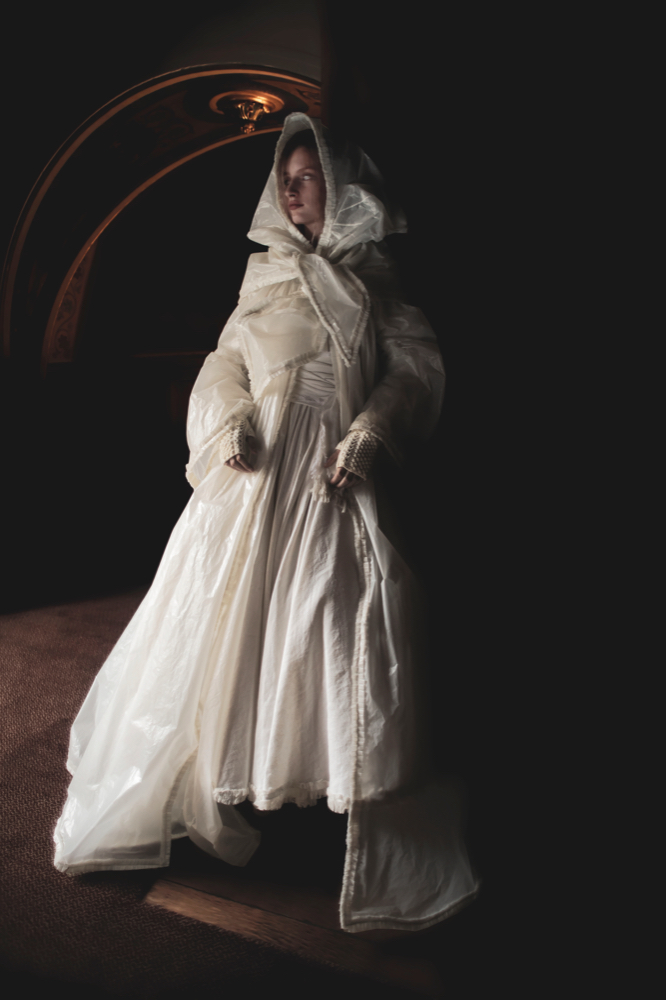 7. An ecru jacket in crochet and bobbin lace in the early twentieth century, embroidered with guipure flowers on a « Romanian » dress belted with an ecru silk and cotton taillonne on a ruffled tulle petticoat.

8. A skirt with three superimposed ruffles edged with ecru ruching and a white boutis jacket trimmed with flower embroidery in white cotton.

9. A long jacket in patched silk canvas with squares and rectangles in a frayed crude silk and viscose bunch over a « Romanian » dress belted with an ecru silk and cotton taillonne on a ruffled tulle petticoat.

10. A skirt and a shawl embroidered with seashells in a greige floating thread jacquard on a « Romanian » dress with a belt in ecru silk and cotton on a petticoat with ruffles in tulle.

11. A skirt with five free flounces in ecru «paper effect» linen and silk cloque and short cardigan with geometric patterns in merino and alpaca wool, braided and fringed on a « Romanian » dress belted with an ecru silk and cotton taillonne on the petticoat ruffled tulle.

12. Cotton shawl crocheted and application of lace mosaics on a « Romanian » dress belted with a silk and ecru cotton belt on a ruffled tulle petticoat.

13. A monastic coat in pleated Fortuny velvet, with draped sleeves, embroidered with water pearl at the end of the 19th century, offered by Mr. François Lesage.

14. A bridal set made up of a lace camisole, white, ecru and gold guipures, entirely inlaid by hand on fragments of lace skirt from Lyon and Calais and a circle skirt in white silk organza, embroidered with stars and leaves of gold guipures.

16. A toga draped in white cotton veil with thread-cut jacquard and wings in a spider-like composition of embroidery threads, raffia and organza feathers.

19. Long coat, short sleeves with pleats in gold, silver and black jacquard with a «granite» effect, trimmed with fine gold guipure by Monsieur Beauvillain on a long full-biased sheath with a train, American armholes in black silk crepe.

20. « Renaissance » pleated cape in damask with flower and leaf patterns embroidered in between with copper mechanical lace from Société Choletaise de Fabrication on a long full-biased sheath with a train, American armholes in black silk crepe.

25. Long cardigan in jacquard in the Maison Rubelli vat style edged with a beaded ruche on a long sheath sheath with a train, stand-up collar in black gold guipures by Monsieur Beauvillain, entirely inlaid by hand.

26. Long batwing coat in pastel, brown and gold floral jacquard by Rubelli, embroidered in-between with mechanical lace from Société Choletaise de Fabrication on a long sheath with a train, stand-up collar in black gold guipures by Monsieur Beauvillain, entirely inlaid with the hand.