It’s been 10 years since fashion designer Gary James McQueen debuted his first collection “Life, Death and Rebirth.” Gaining his inspiration and dedicating the collection to his late uncle, McQueen amazed audiences with the artistry and storytelling that was visible through his scarves.

Modernist Fantasy Birds - LIFE - this story is a celebration of life

Our very own Editor-in-Chief Galina Antonova had the chance to sit down with Gary during London Fashion Week for a little tete-a-tete!

24FASHION.TV: It has been a very busy season for you. Tell us about the latest pieces that you showed at London Fashion Week?

Gary James McQueen: I try to create a gallery experience with each collection combining both art and fashion pieces.

For me the foundation of everything I do is based on story telling. Everything starts with the final vision of the fictional character or world I’m trying to create and then this is reverse engineered and separated into art pieces, accessories and garments. It’s so much more than just creating things to wear; it’s about giving authenticity to my creations.

I had a number of Lenticular artworks and photo shoots on display (the final shots became part of the art, for me it's about creating new ideas through design and styling). The Bodysuits from my most recent “Solstice” collection were on display as well as my new Kimono Gown which will form my next collection.

You have recently started working with Italian manufacturer Ratti. Can you tell us a little about what you are hoping to develop?

I met representatives from Ratti over a year ago and have been building our relationship ever since. They have been so supportive allowing me to develop designs and get these into the production without worrying about minimums. Going forward we are looking at new constructions and styles of scarves, and I am also introducing a new silk/cotton Bandana soon as part of a high-end street range.

Where do you currently find your inspiration?

It’s always hard to explain the creative process as it’s more something you feel than verbally communicate. I pull lots of different reference points together that you wouldn’t normally associate with each other to create something new. Sometimes music can inspire a feeling as a starting point then I translate this into a visual narrative in my own way.

Do you see your work as fashion or art?

They both go hand in hand. Yes, I try to create beautiful and luxurious products but without an authentic and engaging story behind each of these, they become obsolete, just things without any emotion or spirit attached to them.

It has been ten years since your Uncle’s death and your debut collection featured a range of Women’s and Men’s scarves in prints dedicated to him. The prints are very powerful. Is there a narrative behind the range?

I made my debut with the Life, Death and Rebirth collection which was dedicated to my late uncle.

Each of these stories have some significance to him. “Life” is based on Lee’s love of birds. I combined a Japanese block printing aesthetic with photographs that I took of pigeons (Very London) making them exotic fantasy birds.

“Death” is based on the Ivory trade and the impact this has had on endangered species. I created a kaleidoscope from animal bones, which at first glance looks very ornate and floral until you take a closer look.

“Rebirth” is based on the rebirth and cycle of creative energy, which depicts moonlit bodies floating in a black void.

What comes next for Gary James McQueen?

There was so much that I couldn’t get completed in time for my recent event and always due to budget, but I have got a new lenticular piece, some sculptures and a one-of-a-kind jewelry piece that I will be revealing soon. Two new stories/collections with everything that’s involved with those and summer street wear that I’m developing too. It’s never about having a shortage of ideas, as my late uncle once said, “Give me time, and I’ll give you a revolution!” 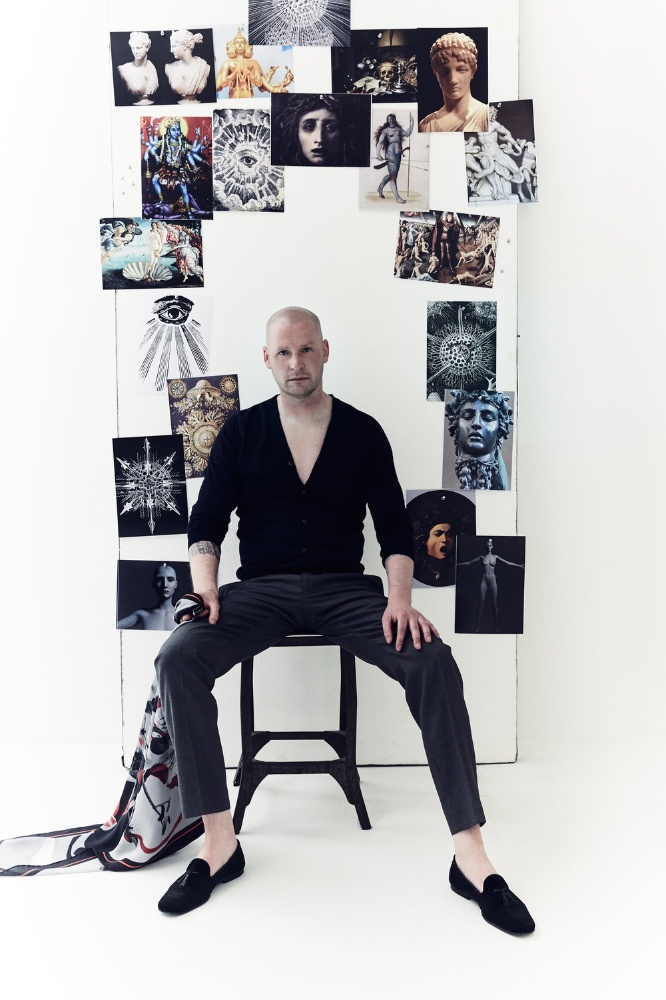